In a recent post, I showed you an image of a dying star. Fusion of helium into heavier elements such as oxygen and carbon became critically unstable and the star collapsed under its own gravity, blowing away its entire atmosphere in the process. The expelled gas cloud's not become a so-called planetary nebula yet i this case because it isn't emitting light on its own. For this we have to fast-forward one or two thousand years until the remaining, super-hot nucleus of the dead star heats up the expanding gas bubble so much that it ionises. This is exactly what I'd like to show you here. NGC6741, aka the "Phantom Streak" nebula in Aquila, is an extremely young planetary, just marginally older than the Footprint of my former post. The difference is that the Phantom Streak has begun to emit light on its own and therefore it truly deserves to be categorised as a planetary nebula, whereas the Footprint isn't quite there yet. Being so young the Phantom Streak's incredibly tiny and needs a lot of telescope power to be recognisable as a nebula and not a star. On my sketch you can clearly see the tiny gas envelope with its rectangular shape. As I've explained before, stars are less dense at the poles, allowing the gas to escape more easily there. For this reason planetary nebulae often take on an elongated or even cylindrical shape such as the famous Ring nebula. If you look at the Saturn nebula, you'll also note the highly elongated internal structure.

So how did planetary nebulae come by their "planetary" nickname you might ask? Yes, they got it because they usually do display a round, sort of planetary shape. This outer sphere, however, was already expelled earlier, thousands of years before the star exhaled its dying breath. Stars close to the end of their life swell significantly and become unstable. They grow under the pressure of the complex fusion process in their core until they reach the point that they've become too big and cool down. Gravity takes over and the star contracts again, heating up the star's surface until fusion shifts to a higher gear, and so on. In this unstable period the star already loses a large part of its atmosphere. Sometimes a very big star may lose so much of it that what remains contracts up to the point that fusion becomes stable again and the star's surface may even become extremely hot. The Thor's Helmet nebula is such an example, a giant star that's got rid of a large part of its atmosphere that's being hurled into space under the fierce radiation of the remaining very hot star. Eventually, in the case of a normal planetary nebula, the gas bubble that's expelled by the sudden death of the central star will catch up with the external gas shell and they'll dissolve into space together.

As regards to our Phantom Streak, the external shell isn't visible to amateur telescopes for the time being since it hasn't been heated up sufficiently. But in another one to two thousand years it will look very much like the Saturn nebula or similar planetaries. 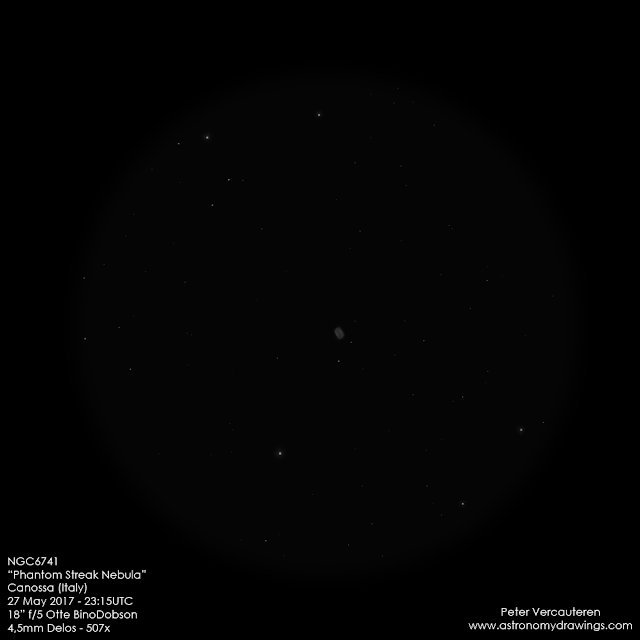 Posted by Astronomy Drawings at 06:31