Me 1-1: A difficult name doesn't necessarily mean a difficult object


When I was a kid, I had this big poster of the stars above my bed. It was my perennial source of inspiration and I was constantly scanning it in search for new objects. Being the proud owner of a modest 60mm refractor, which nevertheless was considered a medium-type telescope at the time, I knew that I didn’t have to put the more daring objects on my observing list. So I stuck to the classic Messiers and I felt proud to have seen a great many of them. But on the chart there were also other objects, which had the scary “NGC” denominator, followed by a four-digit number. At first I sort of neglected them in the knowledge that they would turn out to be invisible in my telescope. Also my friends at the Antwerp observatory talked with great apprehension about the NGCs and so I never even bothered to try them, apart from those which I didn’t know were NGCs such as the Double Cluster in Perseus, which is already visible to the naked eye.

And still... there was one that fascinated me. Right at the heart of my stellar map, near the celestial North Pole, there was this tiny little nebula denominated NGC6543. Was it the number that sounded like a countdown? I don’t know what it was exactly that eventually pushed me to give it a try, regardless of its so-called impossibility status. Surprisingly I didn’t have to look very long in order to find it. Yes, it was small, very small in my humble telescope, but it was unmistakingly there and quite bright too! The next Saturday I couldn’t wait to go back to the observatory to tell all of my astronomy-friends about my observation and for many years to come I felt so proud of this achievement. It was the start of my unstoppable passion for the real faint fuzzies, the ones which others deem impossible, the weird ones, the never-heard-of ones. Many of those reveal themselves to be extremely difficult indeed. Others, like exotic NGC6543 in my 60mm scope, turn out to be remarkably easy.

Take this little bugger for example. It carries the name Merrill 1-1 (or Me 1-1 in short) after its discoverer. I have to admit that I only came across this one by accident and I suppose that only freaks will know about its existence. But when I pointed my binoscope at it, it appeared surprisingly bright. Yes, it’s tiny and I advise you to use an OIII filter when trying to locate it because in small telescopes or at low power it will look almost stellar. But once you’ve found it, try to push magnifications as much as you can and perhaps this little planetary nebula will reveal as much to you as it did to me. At first glance it’s just a tiny patch and not very interesting as such. But the reason why it’s so small is because it lies incredibly far away from us: 19,000 light-years if you please! Imagine that! This almost certainly means that at the time of writing this planetary nebula won’t be there anymore. It will have completely dissolved into space! It’s just that the light from it being blown up and scattered hasn’t reached us yet.

Another puzzling thing to which scientists have only recently found the answer is its central star (which was completely invisible to me by the way). This central star’s quite cold with a surface temperature of only 4,300°C (against e.g. 5,500°C for our Sun) and therefore it remained a mystery how such a cold star could heat up the nebula enough for it to emit light. The central star’s also displaced a great distance from the nebula’s centre, by over 10 times the distance to Pluto. A spectroscopic analysis in 2008 revealed, however, that this star isn’t the cause but that a small companion star is. It is a double star, very much like Ras Algethi, the smaller member of which died and released its atmosphere into space.

From our point of view, we see this nebula edge-on and it’s supposed to have a ring-like shape when seen top-down. All that I could see was an elongated sort of box, but what struck me in particular were two cavities on opposite sides. I don’t know if I’ve observed this correctly since it was so small, so any confirmation would be greatly appreciated. 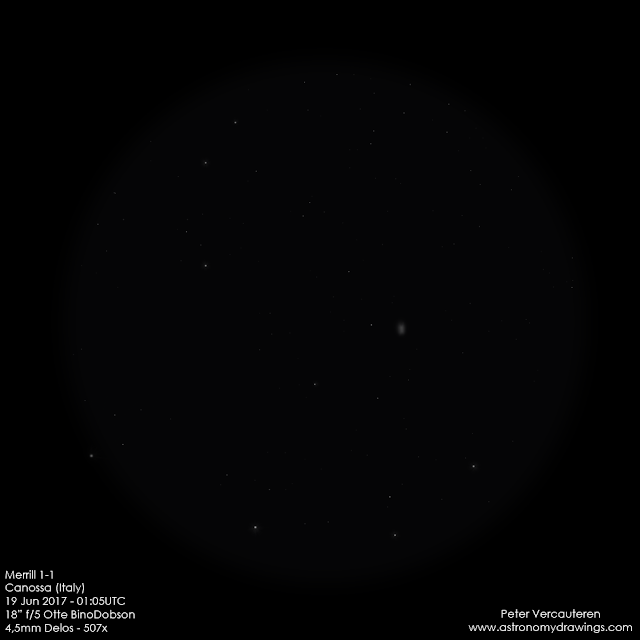 Posted by Astronomy Drawings at 06:54