The peculiar planetary nebula NGC6445 goes by a lot of nicknames and most of those are not original. During the research I did for this post I came across "Box Nebula" (which it shares with NGC6309), "Crescent Nebula" (like NGC6888), "Beetle Nebula" (similar to NGC6302 - "Bug Nebula") and even "Crawling Monster Nebula". Personally, I find the first one the most convincing because rarely does nature create such angular-shaped objects.

The reason why its main ring of ionised gas and dust particles has taken on this broken rectangular form is still unclear. Planetary nebulae form under the violent radiation pressure from their dying central star and are therefore usually spherical or cylinder-shaped. Scientific research suggest that the sometimes odd shapes of older planetary nebulae are caused by the collision with slower particles that were already ejected during the star's red giant phase, long before it collapsed. The gas shell that was blown into space upon the star's death catches up with the formerly ejected shell and ploughs through it, creating a bright ring under the powerful stellar winds from the hot white dwarf.

Our Box Nebula is, however, one of the largest and therefore one of the oldest planetaries and its central white dwarf's become extremely faint; beyond the reach of any amateur telescope. The combination of its enormous size and the cooling down of its central star have significantly reduced the impact of the stellar winds on the nebula and the ploughing has stopped. Imagine a small boat that's sailing very fast. As it's ploughing through the lake at high speed, it generates strong, geometrical ripples in the water. Now imagine that the boat suddenly stops and look at the ripples. All of a sudden they'll break up and disperse themselves randomly in all directions. Long-exposure photographs reveal a vast web of external structures and filaments, only partially visible through my telescope, which extend up to two light-years into space.

We can conclude that this nebula has entered the last phase of its life. As it slowly expands further and as the central star keeps cooling down, also the nebula will cool down and eventually dissolve completely. 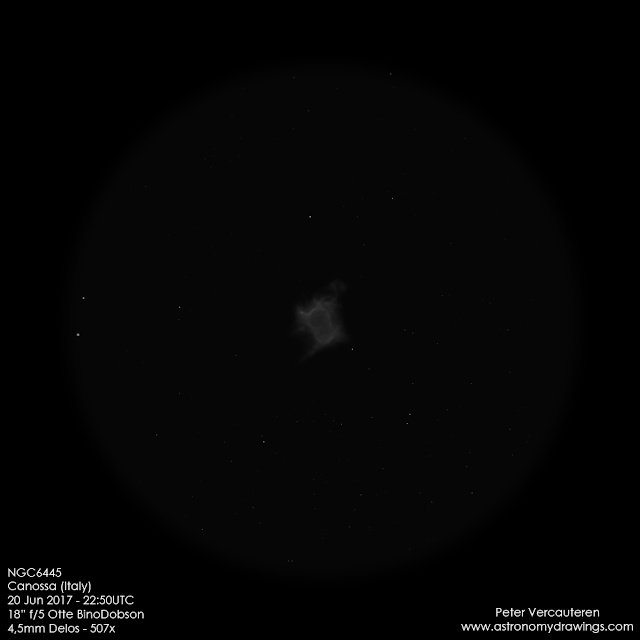 Posted by Astronomy Drawings at 02:06