Abell 72: For those who love a real challenge

I already told you about Abell objects in a recent post and explained that usually they're extremely difficult and even at the limit of large telescopes. Abell 82 is one of the exceptions and even showed some remarkable detail in my binoscope. Number 72 on Abell's list, on the other hand, is another pair of shoes. It's a very difficult planetary nebula that resides in the lovely summer constellation of Delphinus. Its  considerable distance of 4,200 light-years explains its faintness in part, but more important is that this nebula has grown over two and a half light-years in diameter and therefore its feeble light is distributed over a large surface. If you'd like to take on this challenge, approach it with as much aperture as you can get your hands on, low power and an OIII filter to maximise contrast. Did I mention that you're going to need a very good sky too? Well, I guess that was already obvious.

Not a lot is known about this obscure nebula. Given its size, it must be quite old, probably more than 10,000 years, and nearing the end of its existence. Its central star (invisible to me) still appears to be quite hot, at least 100,000°C on its surface, but it's no longer able to fully ionise the enormous gas bubble it ejected and blew up to its current proportions. Soon, interstellar winds will tear the bubble apart and the nebula will completely dissipate into space whereas the remaining white dwarf will extinguish very slowly. 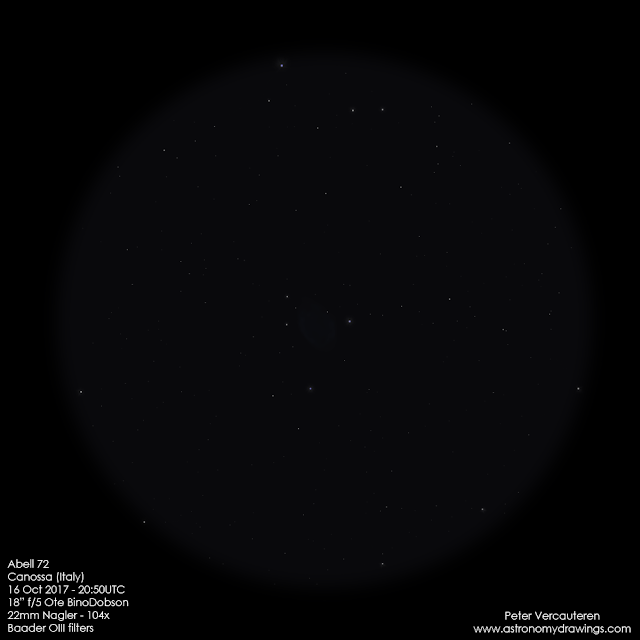 Posted by Astronomy Drawings at 09:14 No comments: 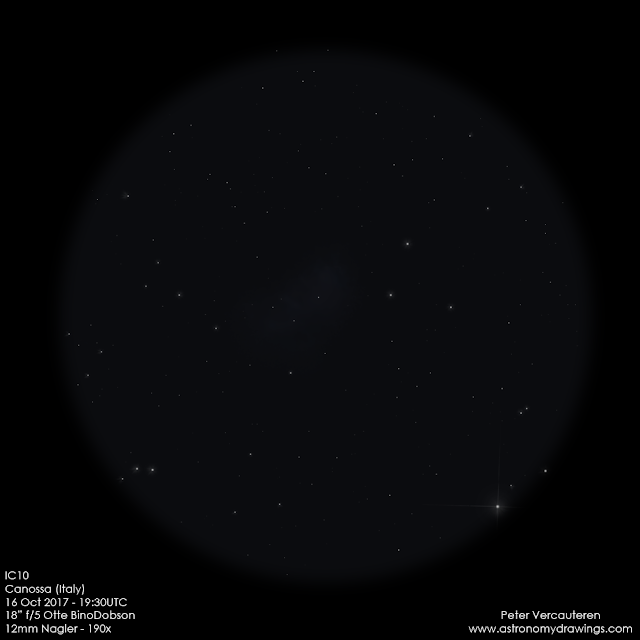 Posted by Astronomy Drawings at 08:23 No comments:

Gamma Cassiopeiae, the middle star of the famous W-shaped constellation, is a hot giant with a surface temperature of 25,000°C (compared to 5,500°C for our Sun) and a mass fifteen times our Sun's. The star shines at us with an incredible luminosity of 40,000 Suns and only looks ordinary from our point of view because it lies at the respectable distance of 610 light-years. It's burning its core hydrogen at an excruciatingly high rate and will most certainly explode as a supernova one day. Already now this star's known as an eruptive variable that may lighten up abruptly to even become the brightest star in its constellation.

Such a big and powerful star must have a tremendous impact on its environment and that's indeed what we find. If you are the proud owner of a ten-inch or larger telescope and have access to a nice and dark sky, point it towards this star and then slightly towards north-east to put Gamma Cassiopeiae just outside of the field of view. This way this bright star will not impair your search for the faint nebulae that surround it too much. These may not be the most spectacular objects you've ever come across and even with my binoscope they were not so easy to detect. But if you try to grasp what it is exactly that you're seeing, you'll surely be impressed. The extreme radiation from Gamma Cassiopeiae is literally tearing neighbouring dust clouds to pieces. The leading edges of these clouds are glowing because of the immense heat and are evaporating as we speak! In a few thousands of years these clouds will have been blown away completely. 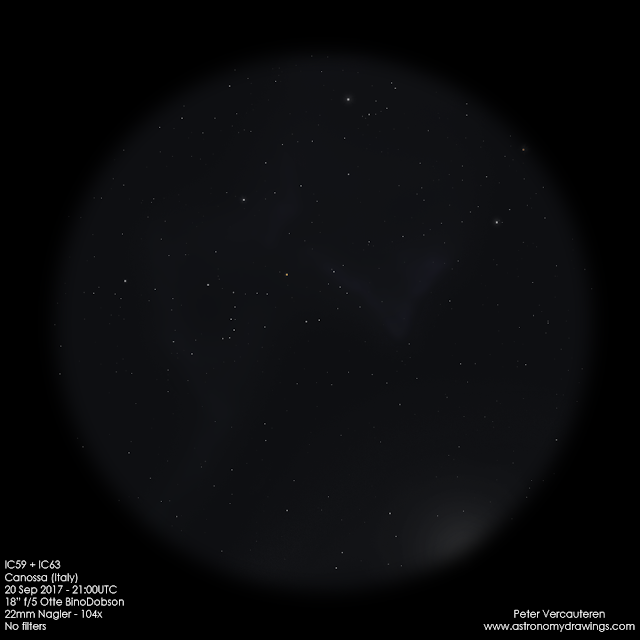 Posted by Astronomy Drawings at 09:51 No comments: 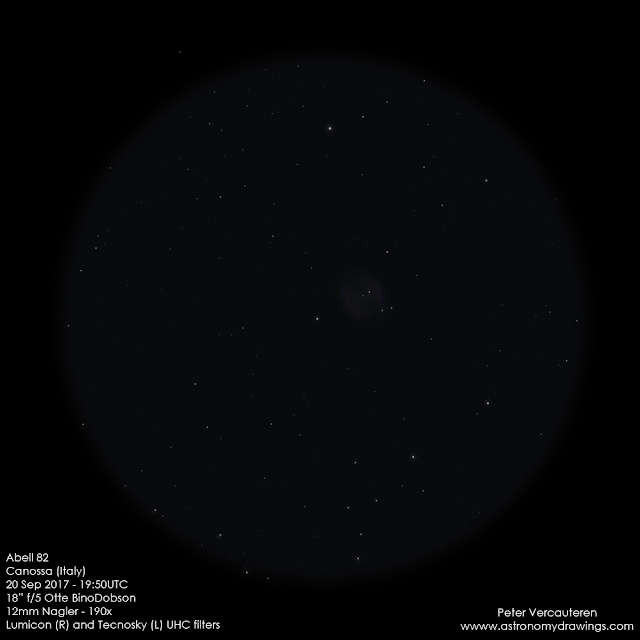 Posted by Astronomy Drawings at 05:17 2 comments:

Discovered by Caroline Herschel in 1783, NGC7789 is one of autumn's finest jewels. Notwithstanding its considerable distance of 7,600 light-years, this open cluster appears so brightly in the constellation of Cassiopeia that it can almost be seen with the naked eye under a perfect sky. Being extremely rich and dense, the cluster's gravity has been able so far to keep most of its stars together during its already fairly long existence of 1.6 billion years. Since more massive stars burn their fuel more quickly, many of its bigger members have already left their main-sequence, "adult" life and have evolved into helium-fusing red giants.

It was quite a challenge to sketch and it took me two full observing nights and a week behind the pc to obtain this result. So I hope that you'll appreciate the effort. The cluster's nickname "Caroline's Rose" comes from the many dark dust-lanes which cut through the cluster and give the impression of flower petals, or of indeed a rose. 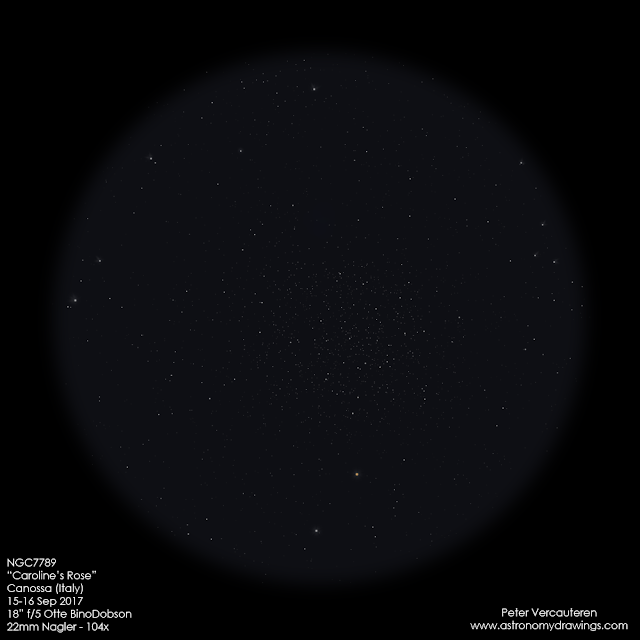 Posted by Astronomy Drawings at 03:14 No comments:

Last week I showed you the famous Bubble Nebula. Now let's move the telescope slightly northwest and you're going to bump into this exceptional beauty. NGC7538's not nearly as popular as it's larger neighbour and this is a disgrace I'd like to rectify with this post.

"Dreyer's Object", named after the great Danish-Irish astronomer John Dreyer who compiled the New General Catalogue (NGC) in the 19th century, is a very active star forming region that lies approximately 9,100 light-years away from us, in the same spiral arm as the Bubble. Many of the stars within it are still very young, "only" 1 to 4 million years old, or are still in the process of forming. What makes this nebula truly special is that it's home to the most massive protostar known to day. On my sketch, it's the lower one of the pair in the nebula's centre, denominated NGC7538S. This star under construction is currently 300 times the size of our Solar System (!), and has a contracting core of anything between 85 and 115 solar masses! Mass accretion is still on-going at an astonishing rate of 1/1,000th of a solar mass per year! The star's surrounded by an enormous disk of gas and dust in which perhaps one day planets will be formed. Unfortunately, the bigger the star, the shorter its lifespan and this extraordinary giant will probably not live longer than a few million years.

The upper star of the pair, MM1, is also one of the largest known giants, although with its "merely" 20 to 30 solar masses it's dwarfed by its incredible sister. This star is slightly more ahead in its formation process and exhibits powerful jets. At least 8 more protostars are currently being formed in MM1's vicinity, in an area only 1 light-year across. This is fairly odd because molecular density and temperature don't seem to be sufficient in that region to induce star formation. Scientists believe that in addition to ordinary mass collapse these stars are being created by shock waves and/or strong magnetic fields. 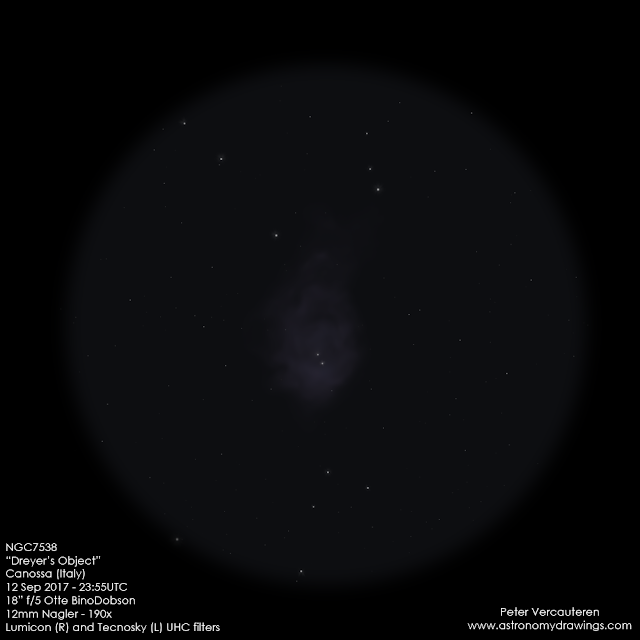 Posted by Astronomy Drawings at 04:41 No comments:

When I showed you Thor's Helmet, I told you about the rare, extraordinary Wolf-Rayet stars. These are super-massive stars, easily containing 20 solar masses or more, which at the end of their very short lives shed a part of their atmosphere and thereby regain a certain stability, re-igniting fusion in their cores. Their surfaces become extremely hot with temperatures reaching 200,000°C and their immense radiation blows the previously ejected matter away, which appears to form a sort of bubble. Eventually these stars will explode as supernovae.

In Cassiopeia we find another beautiful example within NGC7635 or the Bubble Nebula. It's one of every photographer's favourites, but unlike Thor's Helmet it doesn't do as well for visual observers. They both lie at approximately the same distance (around 11,000 light-years), but the Bubble Nebula appears decisively fainter and you need a sizeable telescope in order to see the bubble itself within the faint, nebulous patch. Then again, the bright central star really leaps out at you, even from its incredible distance. Don't be confused by the brightest star in the field of view, by the way, which lies ten times closer to us and doesn't have anything to do with the nebula.

SAO20575, the central star's scientific name, coincidentally lies near a big cloud of gas and dust and the bubble, consisting of ejected stellar matter, is currently ploughing through it. The surrounding cloud itself is also excited by the fierce radiation of SAO20575, up to the point that it's beginning to glow, offering us an unforgettable spectacle... 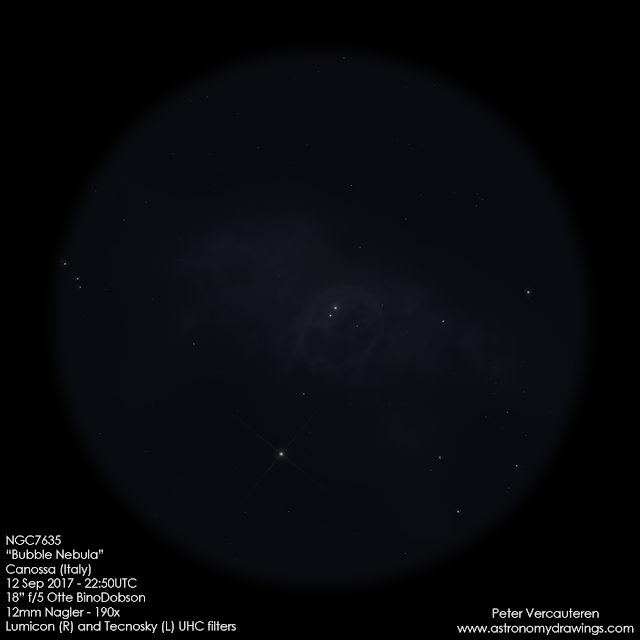 Posted by Astronomy Drawings at 06:19 No comments: