About half a degree to the west of NGC6756 lies this open cluster, called NGC6755. Both are definitely one of these very rare "real" double clusters, i.e. which share the same origin. They lie more or less at the same distance (5,000 lightyears) and are just as young (only 8 million years old). Intrinsically they look very similar i.e. most of the stars in both clusters are more or less of the same brightness. But that's where the likeness ends because NGC6755's a lot bigger and richer (80 confirmed members against 40 or so for NGC6756). Then again, NGC6756's a lot more compact and appears more like a faint globular in small to medium telescopes or at low power. For its bigger companion I obviously used lower power in order to fit all of it nicely in the field of view.

Another thing that struck me during my observation, was that NGC6755 appeared somewhat split in two. After doing some research there does seem to be a dark dustlane blocking the light of some of the stars, cutting across the field from top-right to bottom-left.

Again I must warn you that appearances may be quite deceptive. Stars that seem to belong together from our point of view may be hundreds or even thousands of lightyears apart. The orangy star on the right, for example, is very old and most certainly isn't part of the cluster. The same goes for the somewhat yellowish star below the centre of the field. Unfortunately I wasn't able to find any distance data for these two stars, but I can confirm that the bright star near the top-left edge is a giant that lies a thousand lightyears further away from us. 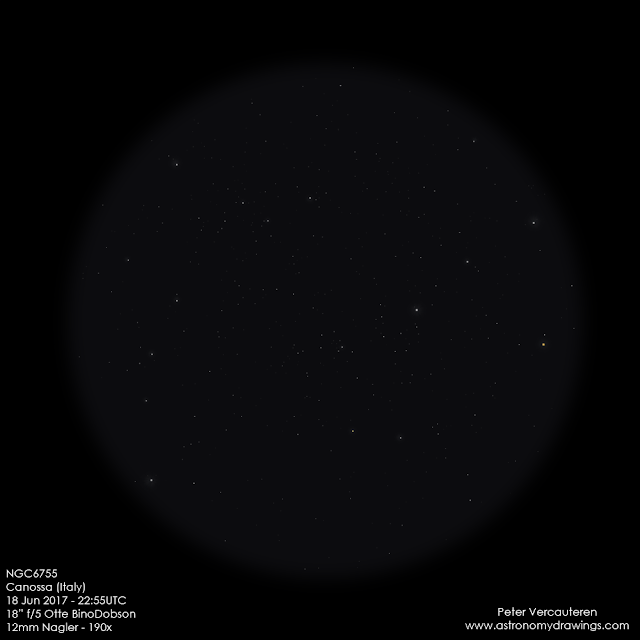 Posted by Astronomy Drawings at 05:41