IC405 and the runaway star

AE Auriga is a very peculiar giant star. It's radius 7 times solar is quite impressive and its 23 solar masses make it definitely a member of the most massive stars club. But this is not the main reason why this star's so out of the ordinary. What does make it so special is that it travels through our corner of the galaxy (well, 1,700 light-years away) at the breakneck speed of 200km/s! Now, if we take the star's estimated age of 2,2 million years and trace its movement all the way back, we find that it originated somewhere in the vicinity of the Orion Nebula! Until recently it was believed that AE Auriga, with Mu Columbae and 53 Arietis, were hurled out of the Orion Nebula together by some sort of cataclysm, like a supernova explosion or a near collision. However, recent measurements by the Hipparchos satellite reveal this to be highly unlikely and the three runaway stars have most probably different origins, albeit still within the Orion complex of star forming regions.

Currently, our giant star's travelling through a cloud of gas and dust in the constellation of Auriga, the charioteer, which is reflecting its bluish light. The star's high velocity's causing a bow shock and leaves a trail of hot gas in its wake: IC405, better known as the "Flaming Star Nebula". It does seem as if the star's on fire and emitting fumes, isn't it? 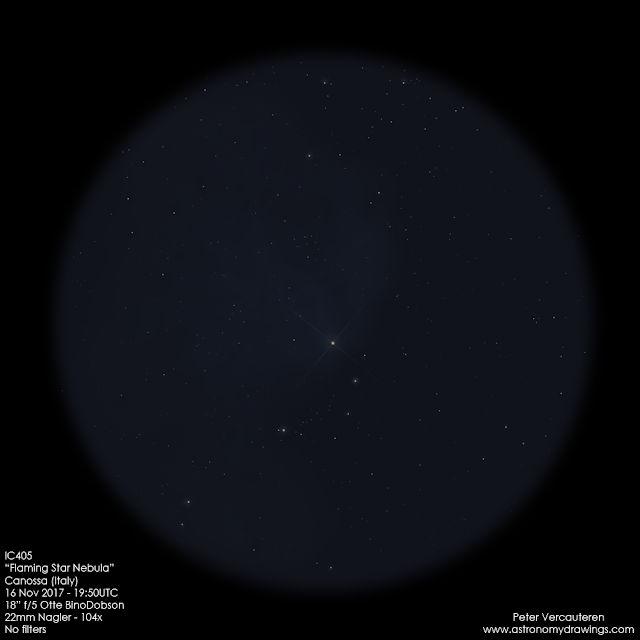 Posted by Astronomy Drawings at 05:39 No comments: 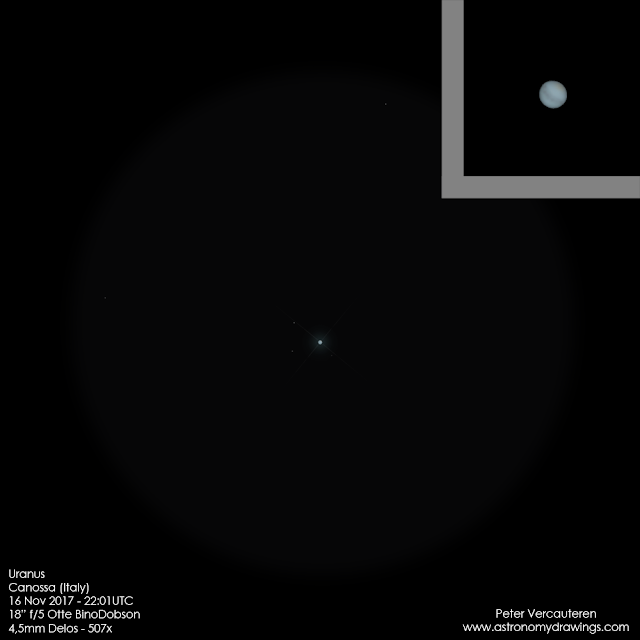 Posted by Astronomy Drawings at 08:59 No comments:

Everybody knows the glorious Double Cluster in Perseus. In spite of their considerable distance of 7,500 light-years, these two clusters are easily visible to the naked eye and offer an unforgettable spectacle in binoculars or low-power telescopes. Few people are aware, however, that in nearby Cassiopeia you can find a lovely triple cluster, although unlike their famous peers in Perseus its three members are physically unrelated.

Let's start with NGC133 on the bottom-left (also see the bottom image with labels). It's a fairly poor cluster with only 13 identified members, based on the stars' proper motions and properties. Yet, it's an extremely young cluster with an estimated age of just about ten million years. The bright and hot youngsters are shining at us from a distance of 2,000 light-years.

Next, we movea bit up and towards the centre of the field of view, to find NGC146. Clearly this is a much richer cluster which may contain up to 200 members. The relative faintness of its stars, compared to NGC133, suggests that it lies a lot further away from us, and this is indeed what we find. The average of the various distance measurements places it some 9,300 light-years away from us. Abeit still very young, with an estimated age of 63 million years it's much older than its apparent neighbour. When I come to think of it, this cluster was formed at the time of the cataclism that caused the extinction of the dinosaurs!

Now let's move down again, and even more towards the centre of the field of view. There lies the most obscure member of the three which doesn't have a New General Catalogue number but just bears the name of its discoverer: King 14. Being the least known of the three, it appeared as the most intriguing and perhaps even the most beautiful of the three, to my humble opinion. Fairly rich and slightly denser than NGC146, it offers a myriad of lanes and structures which are a lovely sight in any telescope. It lies somewhat closer to us as regards to NGC146, with an average estimate of 8,300 light-years. Still considerable I would say. Its estimated age of 32 million years also lies almost halfway between those of NGC133 and NGC146.

Also note the bright star Kappa Cassiopeiae on the bottom-right. It looks like an ordinary star, just one of millions, barely visible to the naked eye under suburban skies. But what if I tell you that this star still still shines so relatively brightly from a distance of... 4,700 light-years? It looks brighter in our sky from its considerable distance than our Sun would shine from a distance of merely 30 light-years! What if I tell you that this star is one of the heaviest giants known, yielding a whopping 23 solar masses, and that its surface temperature's 4 times hotter than our Sun's? For the moment, this star's still very young, but being such an enormous giant it will burn its fuel in just a few million years and not much after that it will most certainly explode as a supernova!

So here you go. Three clusters and an extroardinary star that have nothing to do with each other whatsoever, but which... as seen from our little corner of out galaxy, make a wonderful sight together. 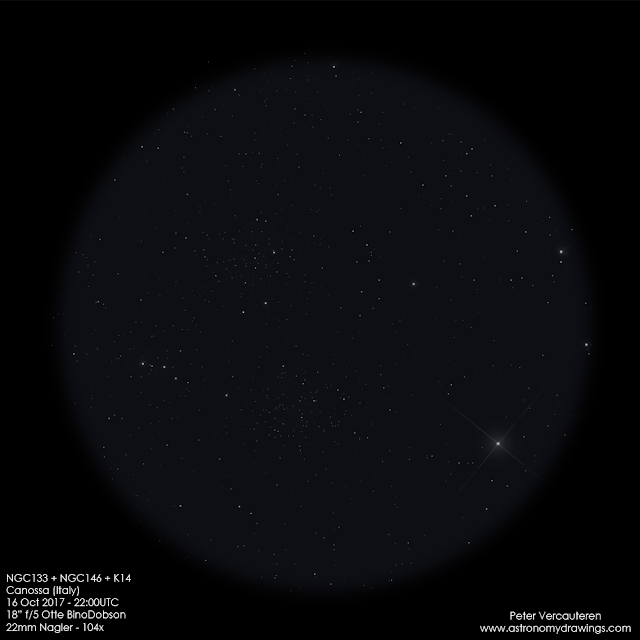 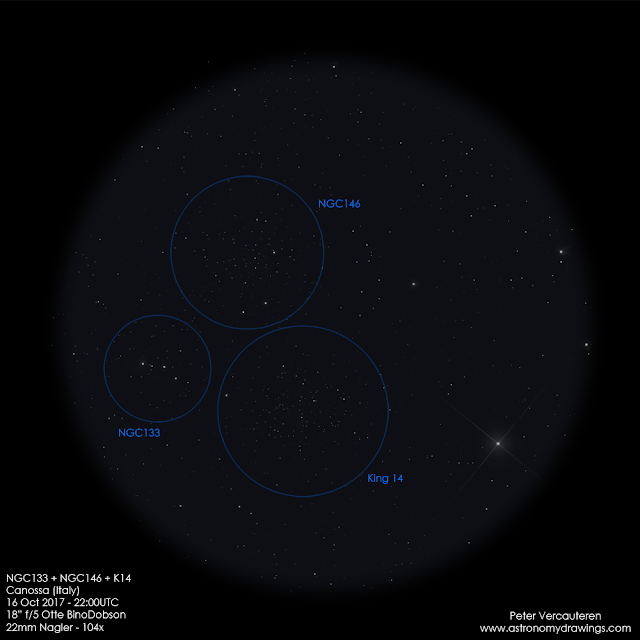 Posted by Astronomy Drawings at 04:20 No comments: