M8: The Hourglass in the Lagoon

In my previous post I showed you the Lagoon Nebula, one of our Galaxy's largest star forming regions. Today I'm going to zoom right into its core, towards a feature John Herschel called the Hourglass Nebula for obvious reasons (not to be mistaken with the small planetary nebula in the southern hemisphere which bears the same nickname). This extremely bright structure's lit up by the very hot star just next to it.

The Hubble Space Telescope discovered several globules in it, which are dark knots of gas and dust that are contracting and which will eventually light up and become new stars. Each of these knots is 10,000 times the distance Earth-Sun across and mark the boundaries of future solar systems. Obviously I wasn't able to observe these little knots with my humble telescope, but nevertheless it's very interesting to know that they're there and that all of this is happening right now as we speak. The star that's causing the radiant glow of the hourglass appears to be surrounded by about a hundred baby stars that have ignited merely a million years ago. All of these little stars are also still invisible to amateur telescopes but soon the baby stars will shed the clouds of dust that envelop them and form a bright star cluster similar to the one on the eastern side of the Lagoon Nebula. 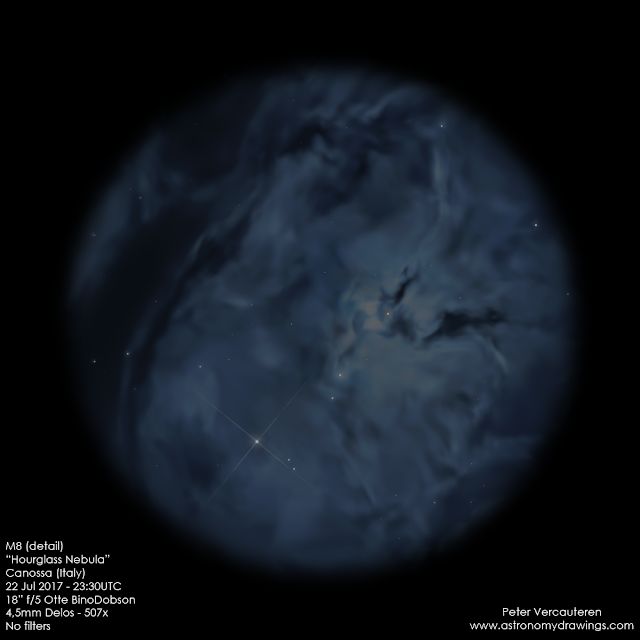 Posted by Astronomy Drawings at 04:05