Nothing to do with it!

Last month I explained how deceiving appearances may be. Things that seem to belong together from our point of view may not be related to one another at all. In this post I'd like to take you on a trip towards one of the most spectacular star clusters in our sky: M46. One of the peculiar things about this star cluster is that it seems to lie right next to another and even brighter star cluster: M47. They're so close that you can easily catch them together in the same field of view with a pair of binoculars: 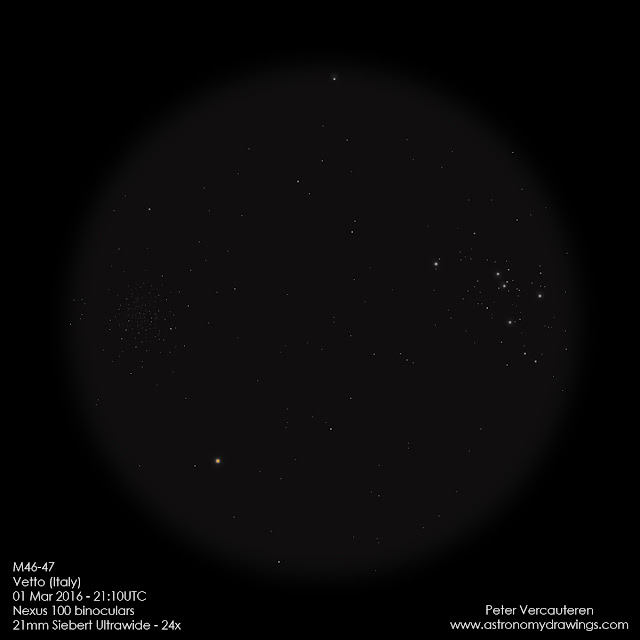 M46, the richer but fainter star cluster lies on the left, whereas you can see the younger and brighter M47 on the right. They look like a couple don't they? With a bit of fantasy you could even swear that M47's spitting stars in M46's direction. But don't be fooled! M47's not only brighter because it contains younger and hotter stars, but most of all because it lies thousands of lightyears closer to us. It lies at a distance of 1.600 lightyears whereas M46's 5.400 lightyears away.

Now concentrate on far-away M46. Towards its top edge you might see a little patch. It's extremely difficult to make out, but if you focus well enough (and perhaps turn off the lights) you may spot it. Now let's take my old home-built 18" telescope and zoom in at 85x: 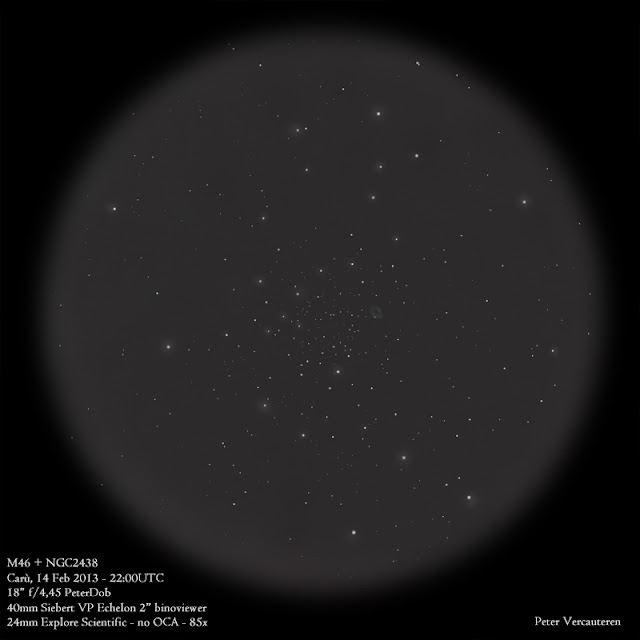 On this sketch which I've made 4 years ago you can see the little "patch" on the right-hand side of the cluster's centre. Keen readers of my blog will already have guessed what it is: a planetary nebula! Yes, this is an enormous shell of gas that was blown away by a dying star. You can already see a lovely doughnut shape in it, can't you? Indeed, in every aspect this little planetary nebula resembles the famous Ring Nebula a lot. Now let's take my new binoscope and zoom into it at 504x: 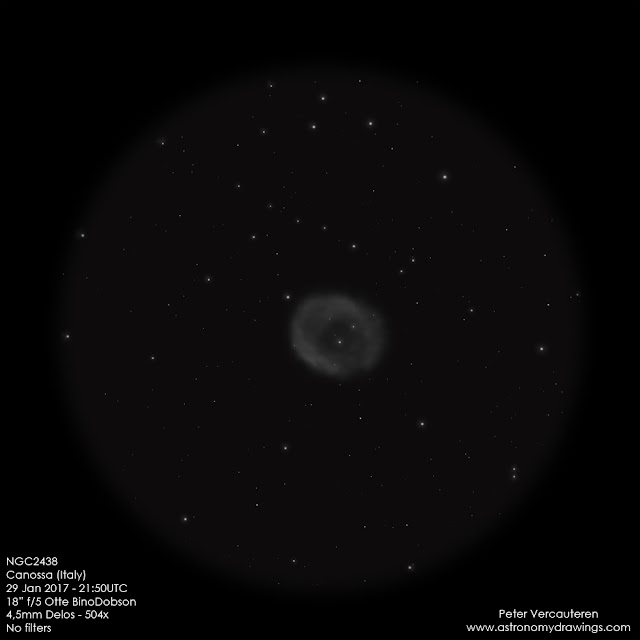 Here you can see our little planetary, called NGC2438, in all its glory. Also its central star's quite obvious. Much more so than with the Ring Nebula you can see that the gas cloud's not really a ring but more a sort of a cylinder, or something halfway a cylinder and the apple without core like the Owl Nebula. See how it's surrounded by the cluster's many twinkling stars that seem to say farewell to the dying companion in their midst.

But... wait a minute... the nebula seems to be travelling at a much higher speed than the stars in the cluster and in a slightly different direction too. Actually, the gravitational force of the cluster wouldn't nearly be strong enough to be able to hold the dying star and its nebula if they're travelling at that speed. What's more, M46's a cluster of young stars that are hardly 300.000 years old. The star that caused the planetary nebula on the other hand must be billions of years old. It simply can't be a member of the cluster! Recent distance measurements revealed that it is in fact more than 2.000 lightyears closer to us. So it has... nothing to do with it.

Posted by Astronomy Drawings at 03:10