Flying over the Moon...

I hate sketching the Moon. The reason for it is that it's too darn complicated. When you point any telescope at the Moon, be it a supermarket model or the biggest and most expensive gun on the market, be it at low or high magnification, you get so overwhelmed by the millions of details that it's easy to lose courage. Most Moon sketchers therefore stick to one or two craters at the time, even though there's so much more to see in the telescope's view. But unfortunately I can't do that. I always try to represent as accurately as possible what it was that I saw through my telescope and therefore it's such a pity to sketch only a detail and leave out all the rest.

But a couple of weeks ago I got all of my determination and patience together and spent 3 hours behind the telescope to produce this sketch. Plus the bigger part of the following weeks to work it all out on the PC until I felt reasonably satisfied. There are still a couple of errors on it and some things still don't seem exactly right to me, but one day you just have to let go and publish. So here it is. I hope that you enjoy it.

The subject of my sketch is the area near the famous Ptolemaeus crater (bottom). With a diameter of 153km it's a very big one. The lava-flooded floor's surrounded by walls up to 2.900m high and is scattered with tiny impact craters, two of which were easily visible. To the south (up on my drawing) lies the slightly younger Alphonsus crater. It still features this typical central peak and its debris-covered surface is cut by a network of rilles. Further north (top of the sketch) lies Arzachel, relatively young and intact. Its prominent central peak rises 1.500m above the crater floor and its sharp wall are up to 3.600m high! These craters form the eastern border of Mare Nubium, the southern sea of clouds, which at the time of sketching was still awaiting dawn. On the right lies the ancient Albategnius crater with its eroded and heavily bombarded cliffs, which surprisingly still rise up to 4.000m above the crater's floor. 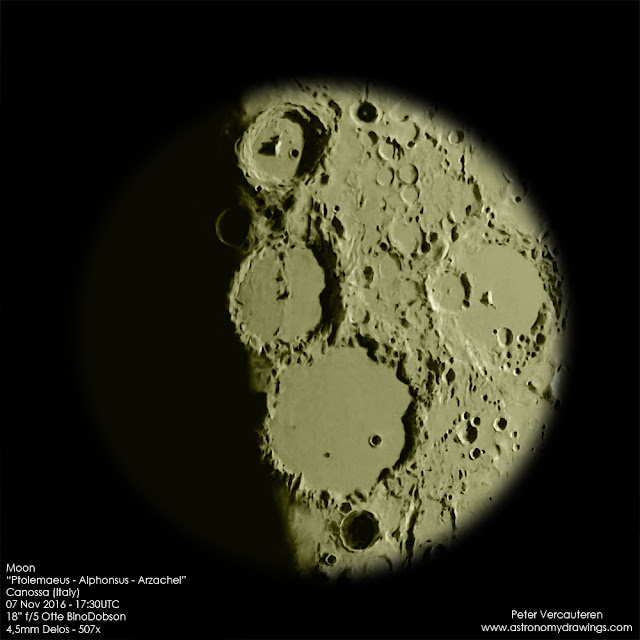 Posted by Astronomy Drawings at 05:24