Like I already explained in other posts, every planetary nebula has its own little character and that's what makes them so fascinating to observe. The Saturn Nebula, or NGC7009 in scientific language, got its nickname from its obvious resemblance to the ringend planet. But there's much more. It's a fairly young nebula, estimated to be no more than 6.000 years old, and it's in full expansion phase (phase III - see my explanation here). The inner shell's incredibly complex and shows structures in all three dimensions, which I was able to distinguish quite well. Stellar winds are extremely high, even up to the point that we see "handles" (ansae) appearing at the poles, where the gas manages to escape more easily. Gas and dust build up near the dying star's equator, making it more difficult for the gas to flow out from there. This is why many planetary nebulae have an elongated or even hourglass appearance and why the famous Ring Nebula's in reality cylindrical. The white dwarf at its centre, the dying remnant of what once a medium-sized star and now not larger than a planet, is currently emitting 20 times more light than our Sun.

Planetary nebulae are generally small but very bright objects, making them stunning to look at, even with small telescopes and under light-polluted skies. So what are you waiting for to discover this one? It's currently at its highest position in the sky and eagerly awaiting for your visit. 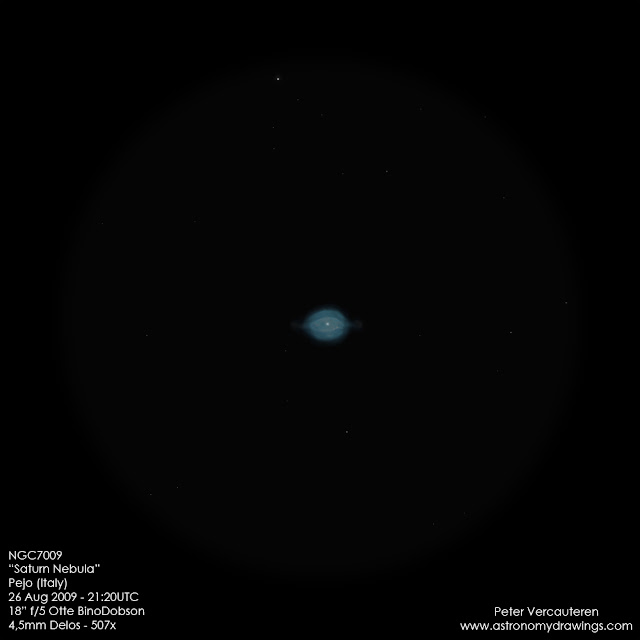 Posted by Astronomy Drawings at 05:38