The power of star formation

While I'm still adjusting my new binoscope, I'd like to present an older sketch but with a very interesting subject. The faint little patch you see here in the drawing's centre is a nebula denominated NGC6857. It's an emission nebula, which means that it doesn't just reflect the light of the surrounding stars but that it's heated up so much that it begins to emit light on its own. This particular nebula is part of another gigantic star forming region in our galaxy but much further away from us than for instance the Orion nebula complex. The distance of NGC6857 is estimated at 25.000 lightyears, which is at almost one quarter of the total diameter of our galaxy. The sketch was made with my good old 18" Dobsonian telescope so you can guess that it's not a particularly easy object and as such reserved for larger telescopes. You can find it in the heart of the constellation of Cygnus, near the rim of the Great Rift, a large, dark cloud of dust that can easily be seen with the naked eye (under a dark sky) and which seems to cut the Milky Way horizontally in two. As I mention it, some darker patches were also visible in the telescope view as I've reflected in the sketch. You have to imagine that the brighter background glow is caused by millions of stars that are so far away that they can't be resolved through an amateur telescope. The darker patches are clouds of dust that block the light from the stars behind them.

Returning to our nebula, the odd thing about it is that it's also a very powerful maser; one of several in the area. A maser is quite similar to a laser, but emitting a beam of microwaves instead of light. Surprisingly, the most common molecules responsible for this are water and methanol, apart from other OH radicals and silicon monoxide. Radiation in the hot star forming cloud excites these molecules up to a point that the majority of them turns into a higher energy state. In turn they start to amplify microwave emissions which are by far the strongest emissions that we observe in the entire radio spectrum. Sometimes listening to our universe can be more exciting than looking at it! 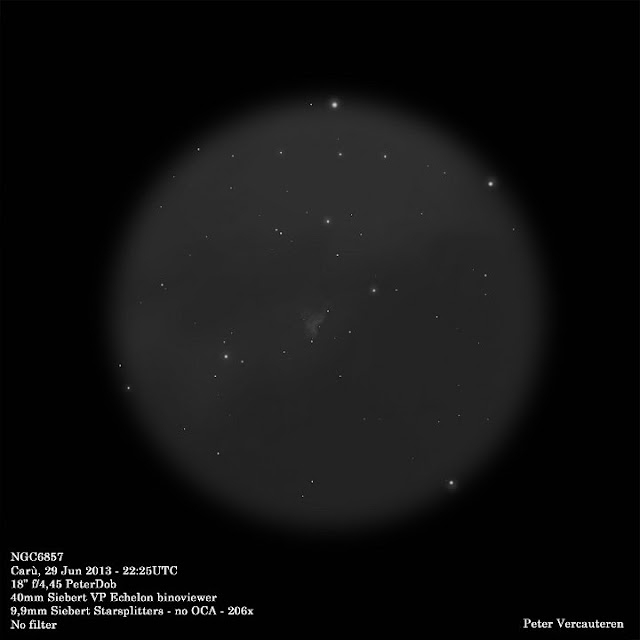 Posted by Astronomy Drawings at 02:37