People invent the strangest names for the objects they find in the sky. I've already talked about the Monkey Head and Thor's Helmet (without even mentioning the Pac Man nebula - yes... it exists!!!), and today I'd like you to take a look at the Skull. At times I'm wondering if Wes Craven's still alive and is currently employed as a senior consultant in the international naming committee for astronomical objects. But when you take a good look at it, it does seem to resemble a human skull, doesn't it? Its central star is a white dwarf and actually one of the hottest known, with a surface temperature of over 200.000 degrees Celcius. It also shows interaction with the interstellar space around it since its western rim (top left on my sketch) is being torn apart by something unknown. The entire nebula compex also appears to move in that direction as well. You can find it in the vast but obscure constellation of Cetus - the whale - as it drifts some 1.600 lightyears away in a poorly populated part of our galaxy. Note that the other stars visible "inside" the nebula are in reality much closer to us.

This is the last drawing I've made with my good old home-built 18" Dobsonian telescope before I sold it (with pain in my heart) to partly fund my new 18" binoscope project. The nebula's fainter than you would expect for its 8th magnitude. That's because it's fairly large for a planetary nebula, twice as big as the famous ring nebula for example, and therefore its light is spread over a much greater surface. But at 85x and with an OIII narrowband filter it already showed remarkable detail. 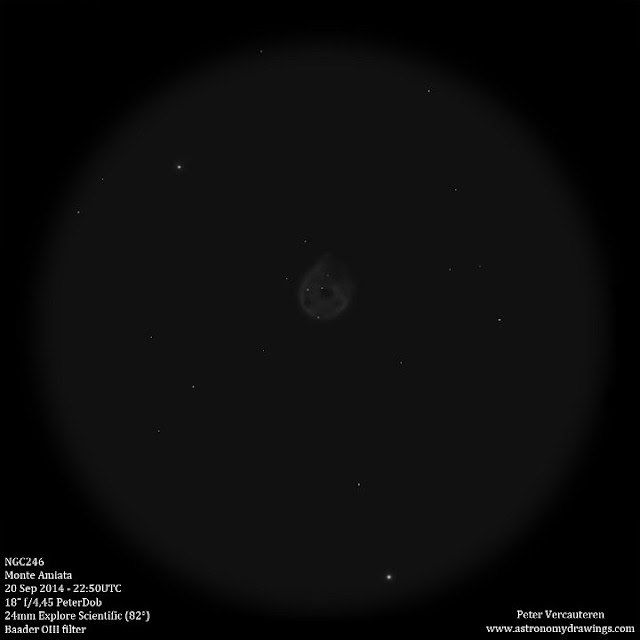 Posted by Astronomy Drawings at 05:39