Aries, the ram, is a boring constellation. It's small and it doesn't have any striking stars or star configurations which makes it stand out between all of its brighter neighbours. Actually, my brother always referred to it as the "vaccuum cleaner" because according to him that's what it looks like and he does have a point. Yes, it houses a couple of interesting galaxies such as NGC772, but for the rest nothing worth noting.

However... there's a very nice and challenging double star to be found in it, scientifically denominated 1 Arietis. Under a really dark sky it should just be visible to the naked eye, a tad above Beta Arietis. When you zoom into it with a telescope, and a sufficiently big one I'd suggest, it will reveal a very close companion. In scientific terms, the separation between the two is only 2,8 arcseconds and believe me, that's entering the realm of the big boys.

Observing close double stars will immediately reveal whether your telescope has decent optics and whether the optical components of your telescope are well aligned (or "collimated" as we astronomers say). If your telescope's of poor quality, the main star of a close double looks that blurry that it disguises its companion. If on the other hand your optics are good, the companion will appear separated from the halo of the main star. Contrary to what you might expect, a star doesn't appear as a real point in a telescope, especially at high magnifications. Yes, stars are so far away that they should look like a point and not like a disk with a perceivable surface. And yet they do show a surface through a telescope, even when you've got perfect optics. In fact, this is an optical illusion caused by the characteristics of light. As you probably know, light acts like a wave which has tops and bottoms. When it passes through a narrow opening, like the lens of a telescope (yes, even a big lens or mirror has to be considered as a "narrow opening"), it will cause diffraction and create a strange pattern when magnified: a small central disk surrounded by rings that fade as their distance to the central disk increases. For more information about this phenomenon, click here. The result of all of this theory is that apart from the glare that a bright star causes, it will also appear as a disk with rings around it which may impede you from seeing a very close and faint companion. In the case of 1 Arietis I was still able to see quite a bit of black between the main star and its companion. But once we're talking about doubles that are less than 1 arcsecond apart, the stars may look as if they're glued together or the companion may become invisible altogether.

In theory, the bigger a telescope, the smaller the diffraction pattern and hence the bigger its resolution power. Some people argue that the best telescope for this kind of high-resolution work's a big and high-quality refractor, but I strongly disagree. It's difficult to find a lens telescope with an aperture over 6 inches and they quickly become terribly expensive, whereas you can have a high-quality newtonian reflector that has three times the diameter of the refractor for only a fraction of the cost. Bigger aperture means that you'll see more and this also goes for objects where optical quality is vital, such as these close doubles. Of course, there's also a party pooper around which is called the Earth's atmosphere. Often our atmosphere will not be as steady as we'd wish and its turbulences will be so bad that not even a 100-yard telescope will allow you to separate a double star. The optical resolution is always limited by the resolution of our atmosphere. But if on a night with lots of turbulences ("bad seeing") you can't separate a double with a €5.000 18" reflector, you won't be able to separate it with a €20.000 8" refractor either.

Returning to 1 Arietis, I was able to see some yellow-orangy colour in the main star and when I did some research afterwards this was confirmed. It's an old giant star that's nearing the end of its life. The companion's much younger and hotter and appears clearly white. The brightness difference between the two isn't very big (magnitude 6,4 and 7,2 respectively) and yet it did look a lot bigger when I made this observation. But obviously a brighter main star will make a less bright companion look a lot fainter, so I guess that this sketch looks fairly realistic. The couple's 590 lightyears away from us and eagerly awaits your visit next time you're out under the stars. They surely deserve it. 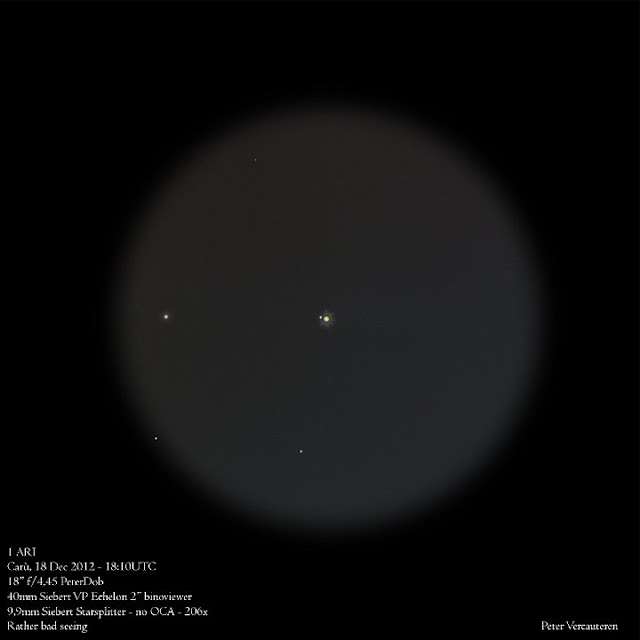 Posted by Astronomy Drawings at 03:32