What to do when the Moon's around

Most people consider the moon to be something wonderful and enjoy its blue rays of light that illuminate the fields of our countryside. The moon's like a friend walking you home on dark nights, making you less afraid of the imaginary dangers that may haunt you otherwise. As I explained in my post about public lighting, in spite of 3 million years of evolution, we still remain animals that are afraid of the predators that lurk in the dark.

Of course, the Moon's beautiful to look at, especially with a telescope that will reveal its barren landscape of craters, canyons and mountains. The problem is however that when the Moon's around you can hardly observe anything else. That's because it reflects so much sunlight that most of the other objects in the nightly sky fade in its bright glare. Star clusters become less rich and sparkling, nebula filaments become ghosts of what they once were and distant galaxies disappear completely. So as much as the Moon may be pleasing to most people, many astronomers would like to fire a nuclear missile at it in order to blast it to bits. I consider myself fortunate to live in Italy where the climate's still fairly favourable and where I'm sure to get at least a couple of excellent observing nights a month. When I was still living in good old Flanders with its many weeks of rain and wind, being an astronomer could be very frustrating at times. If you then consider that for about 10 days a month the Moon will make observing difficult if not impossible, you'll understand why I only had about 10 really great nights... a year!

But... let's not overreact. Of course, deep-sky observing (nebulae, clusters, galaxies,...) is not the thing you'd want to do during a full Moon. But there are some interesting alternatives that can turn a moonlit night into a surprising observing success. One of them is planetary observing. I'll discuss this more into detail in the future, but planets are bright objects that don't suffer much from moonlight. Perhaps you'll lose a bit of contrast but nothing worth mentioning. That is... if there are planets around, because that's not always the case. Don't panic! One kind of objects will come to your rescue: double stars! I already mentioned double stars in my post about colour and just like planets they're generally bright and don't lose anything of their beauty during moonlit nights. The example I want to present today is Sigma Orionis. It's not just a double star, oh no! It's a quintuple star! The central star's already easily visible with the naked eye, just under Alnitak, the left star of Orion's belt. Actually, this central star's a double star - denominated "A" and "B" - but so close that it's impossible to separate with amateur telescopes. They're two very young stars, approximately only a couple of million years old, and they're quite massive too: 18 and 13,5 solar masses respectively. They're only 90 Astronomical Units apart, meaning 90 times the distance of the Earth to the Sun. Or to give you a better idea still, that's just over 2 times the distance to Pluto when it's farthest away from us. Since we're talking about such big and incredibly bright stars, you'll understand that this is pretty close. They orbit each other in a period of 170 years and also this is quite fast if you consider that Pluto takes 248 years to orbit our Sun.

Number three - denominated "C" - is that little star just on the left of the main star (or inseperable pair as I explained). It's a white dwarf which roams at a distance of 3.900 Astronomical Units (Earth-Sun distances) from the central pair. The two stars on the right, "D" and "E", lie at 4.600 and 15.000 AU respectively. Both of them are roughly 7 times the size of our sun, but that's where the similarities end. "E" is one of these weird helium-rich stars and this gas also appears to be concentrated in patches caused by rotational and magnetic forces. This kind of stars is still poorly understood and we need to do a lot more study to unravel their mysteries.

Where the orbit of "A" and "B" is stable, those of "C", "D" and "E" are not and soon they'll be flung into deep space, ever further away from the central pair. "A" and "B" on their part are so massive that they'll have a very short lifespan after which they'll both explode. "A" will be the first to go, possibly causing such a shockwave that it'll expel also "B" from the system.

High-accuracy observations have also revealed numerous brown dwarves in this system, stars that are actually too small to become real stars but which still radiate much more energy than they receive from their environment. Their size should be only a couple of times that of Jupiter.

I deliberately made this sketch during a full moon, just to show you what this does to the normally dark background of the field of view. But still, the Sigma Orionis system was a joy to look at. Interesting to note is another triple star in the same field of view, denominated "Struve 761", just a bit below Sigma Orionis (the 3 brighter ones). Again you can see how deceiving an observation can be because this system is actually much closer to us than the Sigma Orionis system, 142 lightyears against 1.150 lightyears! 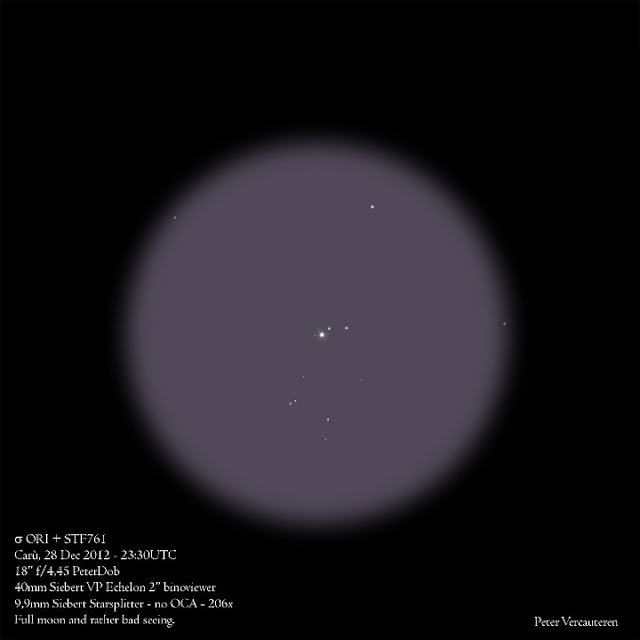 Posted by Astronomy Drawings at 05:33