There are sooooooo many stars

A very wise person once said that the universe's so mind-bogglingly large that it would be a serious waste of space if it were just for us. The Sun's an insignificant little star among the 100 billion others in our galaxy alone (200 to 300 billion if you count in dwarf stars), and according to the best estimates astronomers can come up with there must be at least 100 billion galaxies in the universe. If you then consider that most stars have a planetary system, it would be most unlikely that we were on our own. After all, scientists are no longer asking themselves if there ever has been (or still is) life on Mars but when we're finally going to find undisputable proof of it and there are at least three or four other candidates for life in our solar system. So imagine how much other life there must be out there! Life, no matter how primitive, almost seems to be inherent to the formation of planets.

Take a look at this sketch... In the centre you see a galaxy (denominated NGC6928) comparable in size and shape to our own. Yes! That blob's just like our Milky Way and contains at least as many stars! It lies 200 million lightyears away from us and therefore we see it as it was 200 million years ago. The light that we now see from the galaxy started its journey towards Earth at the era of the Triassic-Jurassic mass extinction, the event that wiped out about 50% of all life on our planet, which in turn created the opportunity for the dinosaurs to become the dominant species. I'm telling you this so that you'd get the right sense of proportion.

On the top-left there's another galaxy (NGC6930), which is of the barred-spiral type (see here for explanation) and slightly smaller. But that's not all. If you look very carefully on the right of the main galaxy, you might see a faint little blob. Also that's a galaxy (NGC6927), but with a diameter of "only" 36.000 lightyears a fairly small one. Are we over and done with? No! Look on the top-right, between the two stars near the border. If you've got good eyes, you might see yet another little galaxy (NGC6827A) there. With a diameter of 17.000 lightyears it's rather a dwarf galaxy, but still it contains many billions of stars. Now go back to NGC6930, the brighter galaxy on the top-left. If you take a good look at its lower extremity, you may again see a kind of blob. Also this is a galaxy, a bit more distant, which lies behind NGC6930 and which scientists refer to as UGC11590.

That's all that I managed to see with my telescope and my eyes. Photographs of this area, on the other hand, will show you yet another, much more distant galaxy that lies exactly between the two main ones. The whole group of galaxies is travelling away from us at a speed of 4.100km... per second!

No, we're definitely not alone. The problem, however, is that communication with any extraterrestrial in one of those galaxies would be a bit slow because it would take 200 million years for our message to arrive. 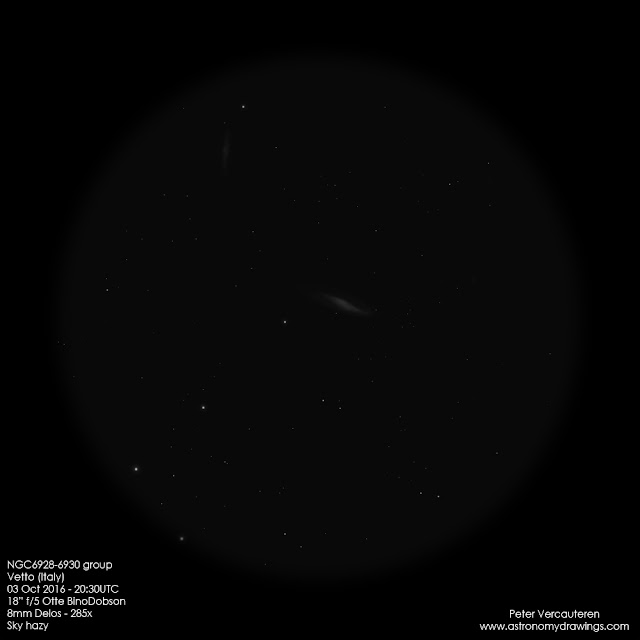 Posted by Astronomy Drawings at 05:21