There are a lot of sketching colleagues to whom I bear the utmost respect. Today I'd like to present two of them who're creating lunar sketches so real that you get the impression that you're flying over the Moon's surface in an Apollo lander.

On the sketch below, my American friend Randolph chose to draw the western part of Mare Nubium, the "Sea of Clouds". On top lies Bullialdus, with its diameter of 61km a medium-sized impact crater which stands out even more because it lies in an isolated and featureless area. Its wall rise more than 2.500m above the plains that surround it whereas its crater floor sinks almost 1.500m below them, apart from the central mountains which reach 1.000m above the floor. On the sketch you can clearly see the well-preserved terraces of the inner ramparts. Below the sketch's centre lies a much older crater, called Kies. It's a bit smaller - 44km across - and its floor's completely covered with solid lava, leaving only remnants of the original rim that stick out above the lunar surface. Near the bottom you can see the Mercator promontory which form the southern edge of the "sea". Interesting to note are the bright "scars" between the two main craters and east of Kies. Those are rays of the famous Tycho crater, which lies some 400km more to the south. This particular crater's very young, well... only 108 million years old... and the dust and debris that blew up when a crashing asteroid created it, spread some 1.500km across the lunar surface. These rays are still quite evident as you can also see here. 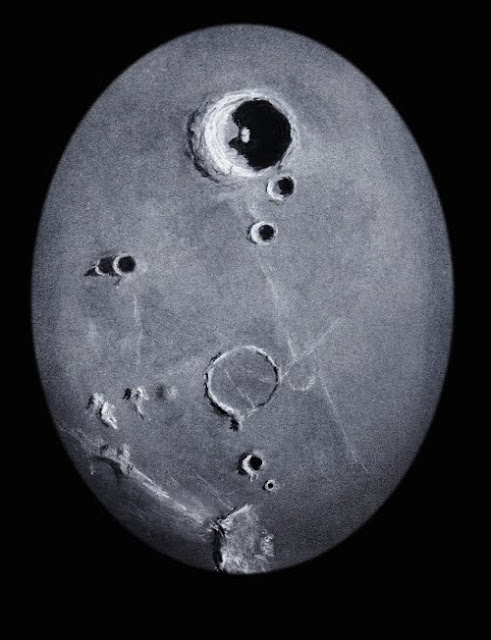 A second sketch that I'd like to present was made by Giovanni, a dear Italian friend of mine. He chose to represent crater Marius at dawn. The best times to observe the Moon are when it's crescent or waning because the rising or setting sun casts long shadows behind the mountains and crater walls, as you can see here. Also Marius is quite isolated, at the heart of the vast Oceanus Procellarum ("Ocean of Storms") and, just like Kies, its floor (41km in diameter) is completely flooded by basaltic lava. The hills in its vicinity, however, are even older and have a volcanic origin, rather than being debris of an asteroid impact. Recently a Japanese probe discovered a large cave skylight in one of these hills that goes 90m deep. This could be a favourable spot for future lunar colonisation.

You can see much more of Giovanni's incredible work on his blog here! 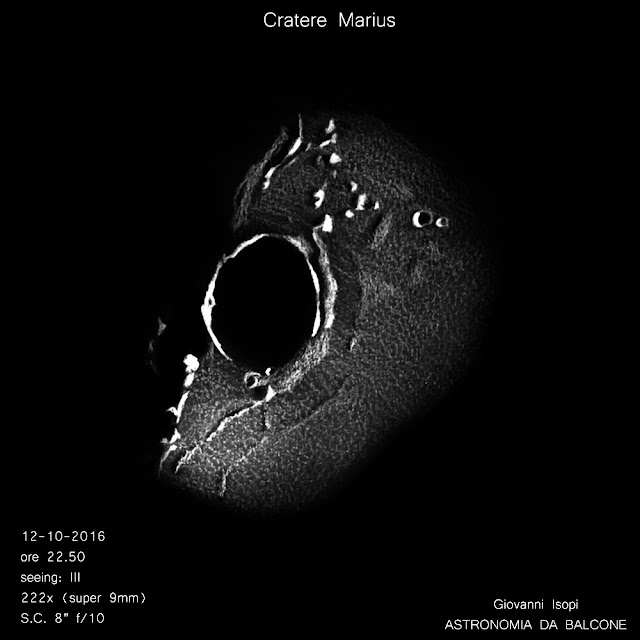 Posted by Astronomy Drawings at 04:16