No, this blog post isn't about a wild seventies' disco night. It's about globular clusters.


On public star parties, there's usually a little professor around: a cute little boy or girl that already knows everything about the planets and stars and who'd been moaning all day until his (or her) parents finally gave in and took him on a 50-mile drive to an incredibly remote spot in the mountains in total darkness in order to meet us astronomy goons. Obviously he can't wait to cast an eye into my telescope and so for starters I point it at a globular cluster. Then, before I guide him up the ladder, I assign him with a very important scientific mission: "Please, this is incredibily important! You have to count exactly all the stars that you see!"

Now have a look at my sketch and smile. There are about a hundred thousand of them :-)

Globular clusters are more or less spherical objects that contain many thousands of stars and which accompany our Milky Way, or other galaxies as well. These clusters are among the most spectacular objects in the sky, especially when observed through a medium to large telescope which allows you to distinguish all of the individual stars right into the cluster's core. This particular one, M15, is 175 lightyears across and lies more than 33.000 lightyears away from us. It's also one of the most compact globulars that we know as it has undergone a "core collapse". Scientists believe that there may be a black hole in it which caused this sudden contraction. Another surprising fact about globulars is that they're not young objects at all. Originally, scientists believed that they were made up of stars which had been ejected from our galaxy. But in reality they were formed at about the same time as our Milky Way, some 12 billion years ago, very similarly to the the formation of planets around newborn stars. However, star formation within the globular clusters began much sooner than within the galaxy itself and so they contain some of the oldest stars in the universe. Given that the universe itself is estimated to be some 13,8 billion years old, these globulars and their stars have been around for most of that time. In comparison, our Sun and solar system are "only" 4,5 billion years old.

Globular clusters are also incredibly dense, as you can see on the sketch. Whereas the nearest star to our solar system lies 4,2 lightyears away, the stars in the globular's core are at least a thousand times closer to one another. If you'd like to know what it would be like to live in a globular cluster, imagine that the whole sky's filled with stars that are 10 to 20 times brighter than the full moon! Such an environment would be most unfavourable for planets because of the constant gravitational interaction with nearby stars and therefore it's highly unlikely that we'd find life there. But they remain unparallelled in beauty when observed from good old Earth. 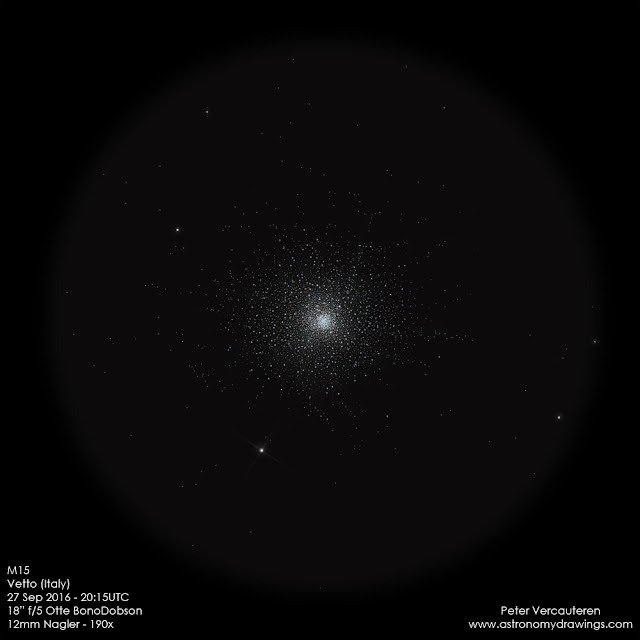 Posted by Astronomy Drawings at 01:54