The Cigar Galaxy and a Supernova

Every now and then, we are testimony of something so incredibly extraordinary that we can only explain it in math because our minds are simply too small to grasp the mindboggling facts.


We all know that looking at our sun is bad because its brightness is such that eventually it'll burn your eyes. Now imagine... something 10 billion times as bright!!! That's a 10 with another 9 zeroes behind it! That's how bright a supernova can be! But wait a minute... What exactly is a supernova? In short, it's a massive star, much larger than our sun, which at the end of its life dies in a gigantic explosion. Its entire atmosphere is blown away into space, leaving only its core, glowing and slowly fading until it dies. If the star is massive enough and hence has a sufficiently heavy core, the explosion may even result in the formation of a black hole! More technically, at the end of the star's lifecycle, the nuclear fusion process which generates its energy becomes so unstable that it can no longer withstand the gravitational pull from its core. The star suddenly collapses and this shock causes the expulsion of the outer gas layers into space.

Only five such events have been recorded by mankind in our own galaxy. The most famous of which were the one in 1054, observed worldwide and resulting in the notorious Crab Nebula, and the one which was amply observed and documented by Kepler in 1604 in the constellation of Ophiuchus, the snake bearer. Supernovae were important events because they convinced early scientists to abandon the old Aristotelian idea that the universe beyond the moon and planets never changed. Since then, many more supernovae have been observed in other galaxies and two years ago we were so lucky as to have one in the fairly close Cigar Galaxy, or also known as M82. When you look at my sketch, you'll immediately understand where it got that nickname from. It's a so-called "starburst" galaxy, which means that due to external circumstances, in this case the strong gravitational interaction with nearby galaxy M81, the galaxy's being pulled and squeezed all over. This interaction started about 100 million years ago and has gradually deformed M82, resulting in all of the galaxy's gas being funnelled into its core which in turn triggered an extraordinary rate of star formation, at least tenfold compared to normal galaxies such as our own.

Two years ago a stunning supernova exploded within it, becoming so bright that it actually became visible to small telescopes and binoculars! Given its distance of roughly 12 million lightyears, that's quite an event. Yet, it's one of the closest supernovae observed in recent history, superceded only by the 1987 Tarantula Nebula supernova, which was only visible on the southern hemisphere and was 167.000 lightyears away. Yes, and the one in 1972 which happened 11 million lightyears away if you wish. But bear in mind, as I explained in my previous posts, that in reality the Cigar Galaxy supernova happened already 12 million years ago, much prior to the appearance of the first hominides on the african plains. On my sketch it's the bright little star within one of the galaxy's dark dust lanes. Observational data confirmed that in reality it should've appeared much brighter still but that much of its light was indeed blocked by that cloud of dust. It was first discovered on the 21st of January 2014 (although earlier photographs of the galaxy already show it) and reached its peak about a fortnight later, before beginning to fade again slowly. Soon after I made this sketch the supernova disappeared for us humble amateurs and its remnants can now only be observed with extremely large and professional instruments. 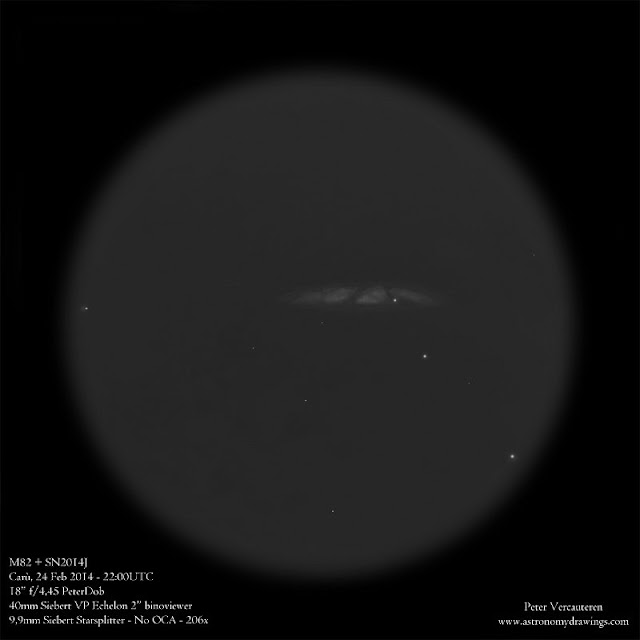 Posted by Astronomy Drawings at 08:31